Last time, I told you that this year, our $1,500.00 Great Escape donation to GSEM is earmarked for rehabilitating the Camp Wabasso Challenge Course.

GSEM staffer Amy explains the use of and plans for the course.

"The Wabasso challenge course is an experience where girls take risks and work together as a team with trained facilitators. We are looking into building a portable spider's web (where the girls need to get from one side to the next), islands (where small platforms are spaced apart and as a team they have to get from one end of the platforms to the other with only 2 2 by 4's), and an A-Frame ( Move a group member from point A to point B on a wooden A-Frame using ropes attached to the top of the structure) to start to build up the low challenge course. These are great older girl elements that provide an extra challenge to girls who have done the course before. 12 to 24 girls go through the course together, usually by unit.  During the summer all girls in 4th grade and above experience the course: that's 400+ girls each summer."


The donation comes from the proceeds of the silent and live auctions and our merchandise!  Watch for more about our plans for the 2014 Great Escape auction and merchandise.
Posted by GSGreatEscaper at 6:57 AM 2 comments:

I'm really looking forward to my trip to "The Fells" on Saturday afternoon of the 2014 Great Escape.  The other day I was reading a bit in my book of "Victorian Parlour Poetry" and came upon this gem by John Hay, owner of the Fells.  Yes, the John Hay who was Lincoln's secretary (and was at his death bed) and biographer and who went on to be Ambassador to England and Secretary of State. Would have been a good looker if it weren't for those far out hair fads of the Civil War Era. 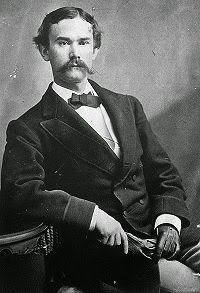 
I don't go much on religion,
I never ain't had no show;
But I've got a middlin' tight grip, sir,
On the handful o' things I know.
I don't pan out on the prophets
And free-will, and that sort of thing,
But I b'lieve in God and the angels,
Ever sence one night last spring.

I come into town with some turnips,
And my little Gabe come along,
No four-year-old in the county
Could beat him for pretty and strong,
Peart and chipper and sassy,
Always ready to swear and fight,
And I'd larnt him to chaw terbacker
Jest to keep his milk-teeth white.

The snow come down like a blanket
As I passed by Taggart's store;
I went in for a jug of molasses
And left the team at the door.
They scared at something and started,
I heard one little squall,
And hell-to-split over the prairie
Went team, Little Breeches, and all.

Hell-to-split over the prairie!
I was almost froze with skeer;
But we rousted up some torches,
And sarched for 'em far and near.
At last we struck hosses and wagon,
Snowed under a soft white mound,
Upsot, dead beat, but of little Gabe
No hide nor hair was found.

And here all hope soured on me,
Of my fellow-critter's aid,
I jest flopped down on my marrow-bones,
Crotch-deep in the snow, and prayed.
By this, the torches was played out,
And me and Isrul Parr
Went off for some wood to a sheepfold
That he said was somewhar thar.

We found it at last, and a little shed
Where they shut up the lambs at night.
We looked in and seen them huddled thar,
So warm and sleepy and white;
And thar sot Little Breeches and chirped,
As peart as ever you see,
"I want a chaw of terbacker,
And that's what's the matter of me."

How did he git thar? Angels.
He could never have walked in that storm;
They jest scooped down and toted him
To whar it was safe and warm.
And I think that saving a little child,
And fotching him to his own,
Is a derned sight better business
Than loafing around the Throne.
Posted by GSGreatEscaper at 11:03 AM No comments:

Summer Escapes - The Joy of Singing Together

No secret that Great Escapers like to sing and make music! Recently the plaque joined some GE people, plus guests from all over the Eastern Seaboard (North Carolina, MD, PA, NJ and CT) at one of Central and Western MA's camps to sing and play all weekend long!

The Singleterry neighborhood was having an encampment, so we did a singalong with the kids (can't resist a chance to teach girl members!) Kaye, Karen B. from GSCNC and Kathy J. put together an autoharp and recorder 'performance' and we had a special guest!  Mountain Dulcimer player Cathy, whom Kaye, Kathy, Deb and Tammy met at the Latham NY Cranberry Gathering last year, came to show us her beautiful instruments and play some lovely songs.  Afterwards, the lucky laminate got to inspect a dulcimer (she brought 3)  and meet Cathy. 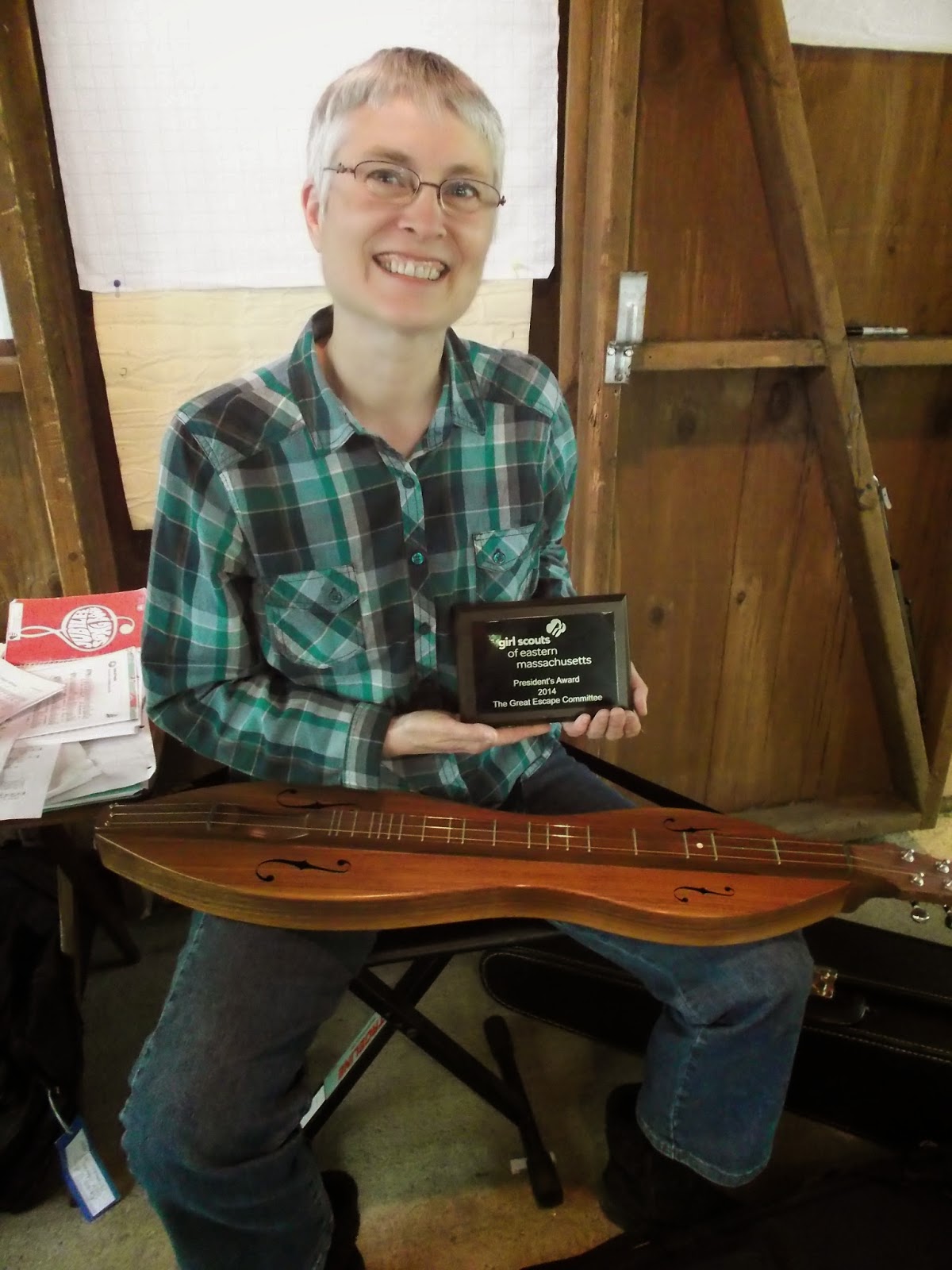 This weekend is an annual June event masterminded by the ever effervescent Kaye and if you are interested in attending next year, whether for the weekend or just Saturday, make sure to let Kaye or Kathy J. know the next time you see them.  And bring your instruments, whether it's a guitar, harp or tambourine.  You can even shake your maracas! 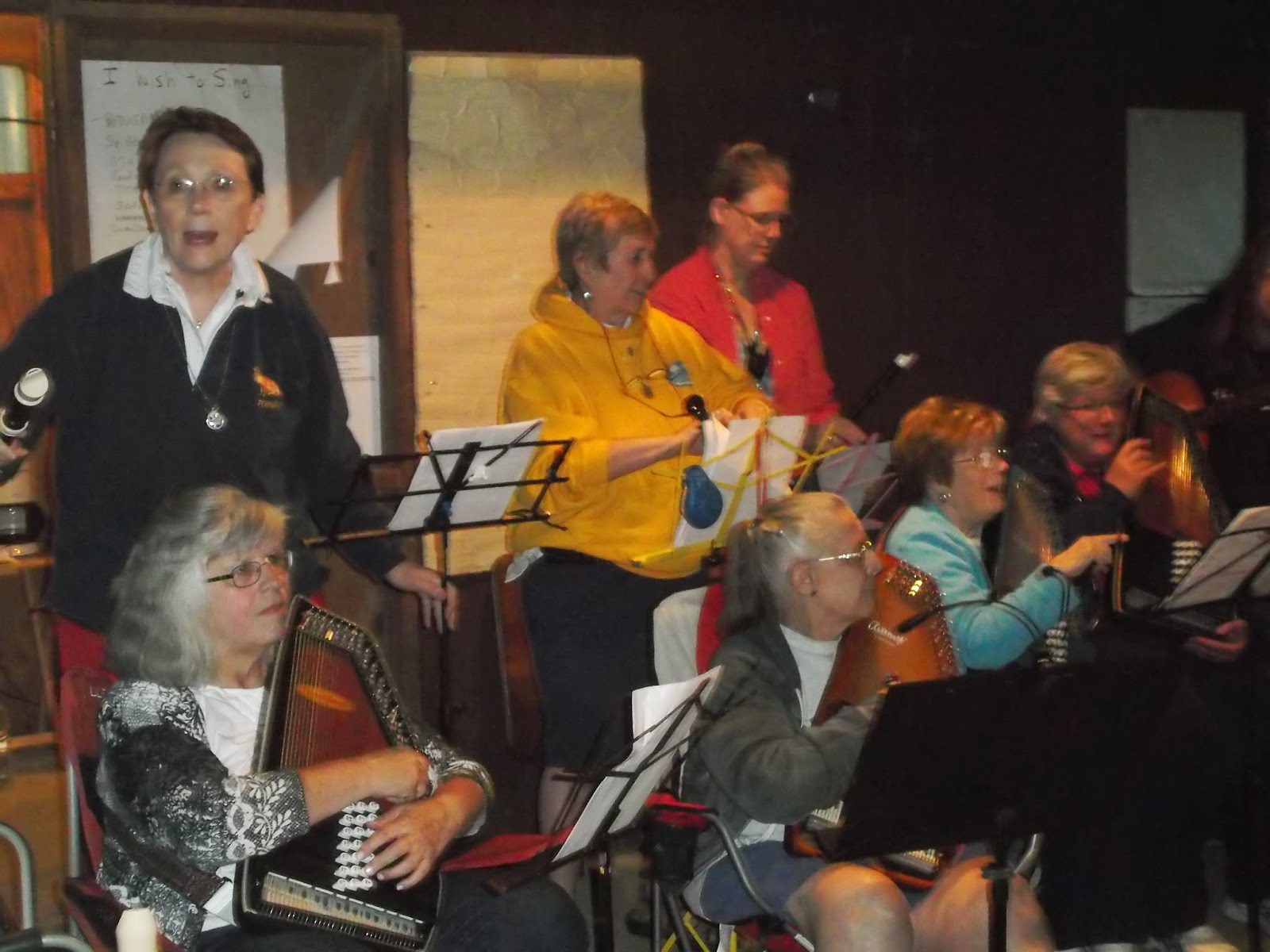 Posted by GSGreatEscaper at 6:22 AM No comments:

Tomorrow many of the Great Escape committee members, along with a lot of other dedicated Girl Scout volunteer facilitators (aka trainers) will be at Camp Virginia for our semi-annual update.  Turns out that June 14th is not only Flag Day, but National Get Outdoors Day!  If you are doing something outdoors with your girls tomorrow, there's a patch for that! 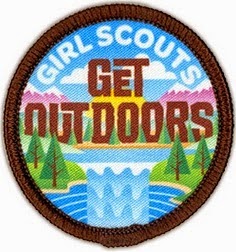 And don't forget to plan an awesome flag ceremony! 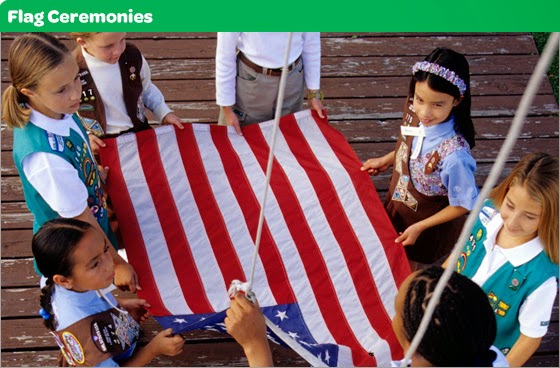 Posted by GSGreatEscaper at 5:51 AM No comments:

If you've read all the posts on this blog, you know that we try to do good things for girls while we are having fun together.  We are excited to tell you about our donation to our GSEM camps for this year.  As a result of the success of the 2013 Great Escape Auction, we gave Girl Scouts of Eastern Massachusetts $1500.00 which we earmarked for the rehabilitation of the Camp Wabasso Adventure Course.  (Do I hear you saying "I didn't know there was an adventure course at Wabasso?"  Join the club!) 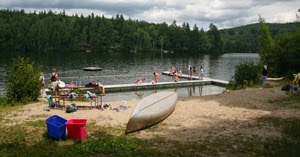 For more about Camp Wabasso, go to Camp Wabasso.  There's lots to do at camp - in the water, on stage,  on horseback, and, soon, in the air....

Since the GE moved to Wabasso, we've donated almost $11,000 to GSEM! Girl Scouts always leave a place better than they found it.  Register to join us this year!


Posted by GSGreatEscaper at 11:10 AM No comments:

Great Escapers Pat and Paula are certified canoeing instructors.  They teach girls and adults to paddle; recently they spent a whole weekend (with Donna, Lesley and Ginny, too) teaching 23 very lucky C/S/A Girl Scouts the 411 on canoes at Winnetaska.  And the plaque came too, as it (and Sue) returned from its tour of Europe.

Posted by GSGreatEscaper at 6:43 AM No comments:

Summer Escapes - Swaps at Our Chalet

When Girl Scouts and Guides go traveling, SWAPS are a big part of the experience.  What will I make or bring?  How will I label them?  The plaque inspected contributions from several countries at Our Chalet.  Notice that someone left some GE cards on the table.  Wouldn't it be nice if someone from Canada or Switzerland decided to come to GE this year?


Posted by GSGreatEscaper at 4:36 AM No comments:

Summer Escapes - Tea and a Biscuit

Like all good Great Escapers, the plaque likes to take some delicious nourishment once in a while!

This sophisticated snack is from the plaques recent Escape to Europe.  At our event, though, you'll find that the fare is just as delicious although a bit heartier!

Posted by GSGreatEscaper at 4:06 AM No comments: 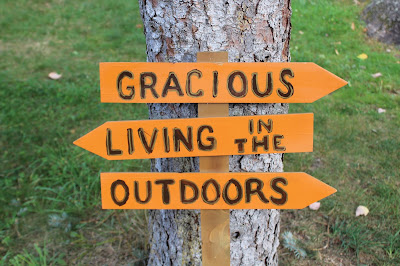